French urban artist Invader came to Hong Kong and left about 50 pieces around the city before departing for his next project. A few weeks ago, I wrote about the adventures I had while searching for his works around the city. Today, The Standard has reported that “government workers have scrubbed off at least one of the pieces”. A spokeswoman for the Highways Department has stated that this was done to “ensure safety of road users.”

Still riding the same bus to school, this, of course, was something I already noticed. On a cold Wednesday morning on February 12, I found the Pac-Man piece that initially brought my attention to Invader had disappeared overnight. I was looking forward to seeing again that morning (I could always count on that to brighten my day) but when I saw a wall with a mere silhouette of what had been, my heart sunk.

I was not surprised though. The Hong Kong government hasn’t exactly been that sympathetic towards the city’s artistic progress, at least from my point of view. Sure, they’re investing billions of Hong Kong dollars into the controversial West Kowloon Cultural District project, but the effort for a long time has seemed to focus more on the potential benefits to the tourism sector rather than the local art scene. Experts seem to think so too. Millions are allocated to the Arts Development Council as well to organize various art-related programs and events, but most of these things involve imported art and displays that don’t actively attract the public to take part in. It’s all money, money, money.

The presence of Invader’s pieces is an opportunity for the community to experience art in their daily lives, outside an organized environment. Among my classmates and friends, only few are genuinely interested in art. I only have a small group of friends who would be willing to go with me to visit a gallery or see a music performance that doesn’t include some big pop artist. Our urban landscape is dominated by order and cleanliness. Street art defies that by providing character to the dullness of the concrete jungle, in a way that brings art to the masses. Without exposure to such things, how can we expect art-related projects to be a success when even the government isn’t exactly showing appreciation and respect for artists? 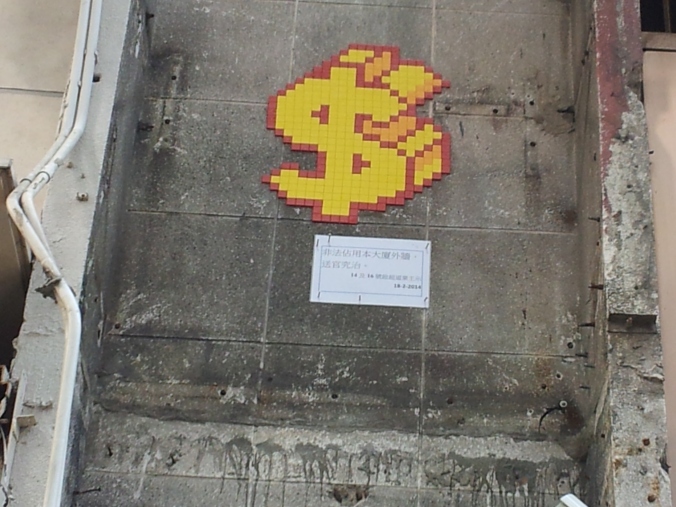 I really would like to see Invader’s works stay for much longer. I really hope they do because they certainly are wonderful additions to the city. Knowing the culture here though, I doubt I’ll be seeing the best of his colorful tiles in their current locations after a few years’ time. I visited two of his works on Sunday and saw notices pinned right next to them: “Those who take up this wall space illegally will be prosecuted.” An omen of what is to become of Hong Kong street art.

What I’m currently up to